We love to get feedback from our shows and we were delighted to receive some very favourable comments from The Leslie Drama Group in Fife who hired our costumes for their recent production of ‘Allo ‘Allo.

The play was entered into the Full Length Play Festival and was adjudicated by Graham Parry with some very constructive and complimentary comments on the actors, scenery and of course the costumes.

“The costume team also did a marvellous job of dressing the actors in appropriate and effective clothing and really paid tribute to the original series. I liked the sense of German formality/intimidation through swastika armbands and leather jackets contrasted with the French peasants and resistance. I loved the use of familiar images from the show such as Michelle’s beret and overcoat and Rene’s black tie and white shirt”

A picture of the cast in costume was published in the Glenrothes Gazette, together with a write up on Leslie Drama Groups sell out performances.

For more information on our ‘Allo ‘Allo costumes visit www.admiralcostumes.co.uk 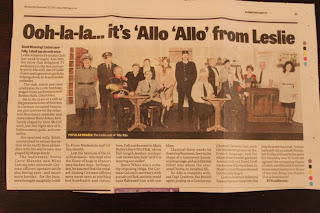 Posted by Admiral Costumes at 00:17