When your pantomime horse gets stuck on the M25


When the telephone rings and a strained voice tells you that a pantomime horse is stuck on the M25, you can confirm that your occupation is not quite the same as most people.

I think I win the prize for the most bizarre phone calls and messages of all time – my answerphone is hilarious. There is no substitute for that exciting twinge of anticipation when you can see a new message has arrived and the mere pressing of button transports you to the potential joy of another totally ridiculous message.

It’s not only the recorded messages that produce hilarious results, it is often the one sided conversations you pick up on when a colleague is engaged in discussion about a costume requirement.

Topics freely under discussion and that cause endless merriment are horses and cows (to be fair) most animals), boobs, ears and sizing.

Sizing is a complete minefield and customers fall into two categories. Those who wish to reveal every intimate (and frankly too much) detail and those whose cryptic dialogue leaves all of us guessing.

I always find the ‘is that the costume shop?’ amusing….. as without pause there follows a launch into complicated costume requests for Batman etc – what a relief it is us then!

People leave the most bizarre messages at night. One can only assume that they are either tired after night work, have just woken from a deep slumber and aren’t quite with it, or heading home after a heavy night of drinking.

I suppose creative thoughts come to the fore in the early hours, but the bald answerphone message played back slightly distorted in the cold light of day is often misguided. A stage full of actors in onesies is but one example.

About 30% of message leavers forget to leave a number, so often there is no possible way of contacting them ever again. May be it is just as well, it will forever remain a mystery what the lady with the gravelly voice wanted with 45 light up skulls and 3 straw hats.

Here are our favourites; ‘I need ears – not just the tips’;  4 pairs of mutton chops please, 1 brown and 3 grey’; ‘will the skirt rip off quickly’; and stick on moustaches – actually, anything stick on is absolutely guaranteed to lift the spirits and create a hoot.

Other dangerous areas that cause inappropriate merriment are humps and paunches. We certainly have had some ridiculous conversations about those and calves….. Calves seem to be an issue with more people than you care to realise.  You can also get a huge amount of mileage out of hairpieces.

Masks are positively dangerous.  The group that ordered full face latex masks to wear for a laugh at the airport were never heard of again.

Kilts produce massive amounts of fun and of course dames. There are dames and there are a segment of the male population who don’t need much excuse to don a frock and under a small amount of false protest will slip into a bridesmaid dress without hesitation.

Today it has been Officer Crabtree and whether the cape should swing to the left or the right……….

Anyway, I’m just off to retrieve my messages. 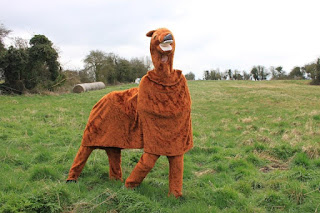 Posted by Admiral Costumes at 02:36