Isn’t it a wonderful thing when you help someone out and it all turns out perfectly.


I had a call one evening; “Hello,” I said briskly, “Hello,” came the reply in a boy’s voice with a strong Scottish accent, “have you got an admiral costume?”


A lad from Scotland had obviously keyed ‘Admiral Costume’ into google and my work on SEO was paying off at last.


“Let me check my stock and I’ll phone you back,” I said.


Some contact details were laboriously extracted, interspersed with questions yelled out to ‘mum’ who was busy hoovering or doing something noisy in the background. The call was fast turning into a 3 –way conversation and was confusing to say the least.


I pictured in my mind several of the costumes I have with red jackets and white trousers with a stripe down the side, add a tricorn hat and all would be well.


I needed to check the size and had stupidly forgotten to ask for the boy’s measurements. I trekked hotfoot off to the store and found what I was looking for in the children’s section. Two beautiful admiral costumes, waiting neatly on their hangers, better than I remembered, but a bit on the small size. I tried to recall the approximate size of an 11 year old.


“That won’t do at all, my 11 year old is taller than me” a client who had come in to discuss land army girl costumes for a photoshoot wisely advised. I’ll phone them,” I said, “to get measurements.”


Mum McAllister answered the phone this time and all became clear. The costume was for Robbie’s part as admiral in the school, production of Pirates of the Carribean’. Pictures of the film show a blue admiral tunic, breeches and a tricorn hat – a magnificent costume.


Mum casually introduced an element of competition. The boy who was playing the part of English Captain opposite Robbie had secured a wonderful costume already and her son needed to look good. This translated into – ‘I want my son to look the best’ and we mums all know what that means.


“I have a costume,” I said simply, “I’ll take a picture and e-mail it to you. It’s an adult costume and may need a few tacks in strategic places.”


I dressed ‘Gladys’ my trusty manikin and mute partner, took a photo and e-mailed it off to the McAllisters.


By all accounts the picture was shown to the drama teacher, deemed perfect and the order was placed. The costume was boxed and posted and arrived the every next day. That’s usually it for me, a job well done.  I don’t usually hear anything unless some thing has gone wrong – believe me, no news is good news!


I was surprised to receive a wonderful telephone message and e-mail thanking me for my efforts. They were delighted with the costume and I had made a wee boys dream come true.


And the moral of the story is; always trust an 11 year old boy, they really do know best.

Names in this story have been changed to protect their privacy 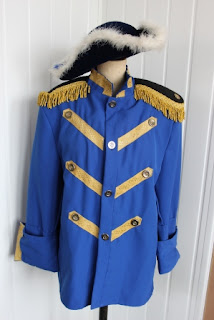 Posted by Admiral Costumes at 23:47