Batman has always been a popular choice for fancy dress parties and with the new film ‘The Dark Knight Rises’ soon to be released, the character is as popular as ever.


Batman first appeared in Detective comics and is an instantly recognisable iconic character ideal for a fun fancy dress theme.
Batman has also been known as The Caped crusader, The Dark Knight and The World’s Greatest Detective.


In the comics and the first film, Batman was accompanied by his crime fighting partner, Robin but in later film versions, Catwoman, Penguin and The Joker are predominate characters.
To hire or purchase our excellent Batman, Robin or Catwoman costumes, call us on 01908 372504 or visit our website www.admiralcostumes.co.uk 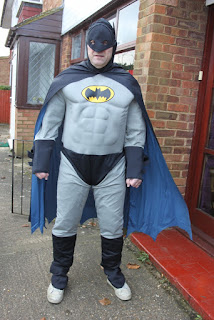 Posted by Admiral Costumes at 00:27