Costumes for all the musicals


Hello darlings…Gladys here.  Well what New Year it was…Ruth and Admiral Costumes Team made sure we partied until we dropped.

Last year I wrote about the amazingly talented AmDram groups and schools we’re working with and it looks like we’re already getting a show line up for the New Year.

Over the Christmas period there was a programme on telly about the top 100 musicals and it was a real walk down memory lane for me.  From Gene Kelly’s Singing in the Rain to Chicago, the http://www.sound-of-music.com/Sound of Music (top 5) and on to the number 1 show…….GREASE (I totally rocked the black satin trousers Sandy wore!!) and it got me to thinking about the costumes the shows needed to bring the stage to life, with glitz and glamour.

There are a lot of costs to consider when putting on a show and that’s from scenery to props, and one of the most important props is the costumes… not only do they give the character depth, they can also portray the nature of the character as well.  For instance if Maleficent, the wicked witch in Cinderella wore a pink floaty dress (we have one of those by the way) would we have seen her as a baddie?  Or if AgathaChristie’s Poirot had been a shambling, untidy character, would we love him as much?  The value a costume brings to a production, I believe, is immeasurable…

At Admiral, Ruth and the team will work closely with you and your production teams to make sure you have the very best costumes for your show, and if you want to see what it looks like – I’m happy to don the outfit as well!!

Oh and don’t forget as well as a great outfit, we’ll also supply all of the accessories as part of the hire cost…so if you’re looking at the Roaring 20’s or going to Glorious Goodwood, we’re the team you want! 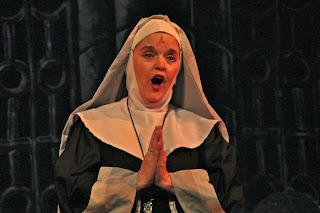 Posted by Admiral Costumes at 04:36