Take a walk on the wild side

Following on from my blog “Those boots were made for talkin’” back in March this year; I described the incredible variety of events and venues a pair of size 11 cowboy boots have enjoyed and how that particular pair seem to lead a highly exciting life of their own .


It is with mild anxiety that I have to report yet another incident that confirms my suspicion that those boots are shaping their own destiny.


The alarm was raised when a neighbour informed me that a lone boot was lurking with intent outside the back door of my shop. Just the one – on it’s own. It had been there for several days and was getting wet in the storms we were having at that time.


How could it possibly be mine? I asked myself, “why would one boot get outside on its own for no reason whatsoever?”


I denied ownership immediately. I keep strict control of my stock and the boots know their place.


The boot was presented to me, limp, rather damp and looking like a cat that had been locked out in the rain. I recognised it at once, it was that cowboy boot again and it’s partner in crime was standing alone where it should be, guarding the boot basket, behaving itself albeit looking rather sheepish.


Whilst the pair enjoyed my undeserved attention buffing them up and restoring them to their former glory, they were spotted by a customer and are booked out again for yet another stint treading the boards in a Northampton production of Oklahoma. They’ve even managed to secure walk on roles for several pairs of their buddies.


Whilst those cunning boots have engineered their own party in Northampton, Gladys and I will be back at the ranch preparing for Halloween…… 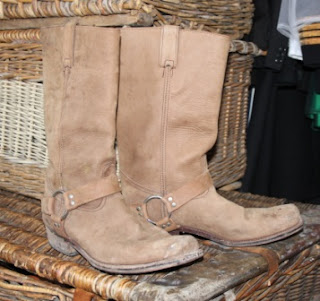 Posted by Admiral Costumes at 23:58