The nuns have a habit

Our nuns habits, tabards, wimples and crosses have had an incredibly interesting and varied time of it recently.


The availability of the Rogers and Hammerstein script and score for amateur use has led to several talented groups bringing them to life with The Sound of Music.


Sister Act at Milton Keynes Theatre encouraged a renewed interest in ‘the habit’ with many feeling the urge to wear one and sing gospel.


Four of our habits are currently at Beaconsfield film school being used in a final year assessment film and next week they are out again ’climbing every mountain’ in another production of The Sound of Music.


The stately black robes seem reluctant to relinquish their freedom from our wardrobe which is becoming a bit of a habit.


For more information on our clergy wear and matching sets of choir robes, contact Admiral Costumes on 01908 372504 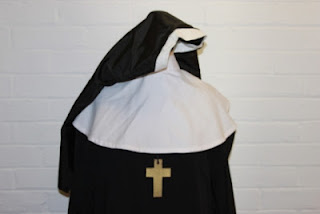 Posted by Admiral Costumes at 00:11