Oh What a Lovely War Costumes


The tragedy of World War 1 is redefined in bawdy music hall terms in this controversial play by Charles Chilton, written in 1963.

The title is derived from the music hall song Oh! It’s a lovely war which is the main musical number in the production with other well-known music hall songs, ‘It’s a long way to Tipperary’ and ‘Pack up your troubles’

The play is usually performed with the cast in Pierrot costumes with images of war and shocking statistics projected behind the comic action of the plot, which centres around a middle class family whose sons end up in the war as cannon fodder.

‘Oh What a Lovely war’ is a popular theatre piece for schools, youth theatres and drama groups and we have been delighted to provide costumes for many productions throughout the UK.

Admiral Costumes have a good selection of WW1 army uniforms, tin helmets and various other wartime artefacts suitable for this production.

For more information on our WW1 costumes and military uniforms, please visit www.admiralcostumes.co.uk or give us a call on 01908 372504 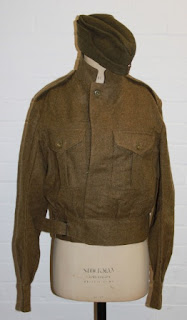 Posted by Admiral Costumes at 05:46